Many of us would have heard about Lean thinking, Lean manufacturing, and so on. Lean concepts are pretty much older than Agile principles. So, what is Lean, and how old is it?

Let's rewind the clock and go back to 1946. It was post World War II, and almost all the productions systems of the world’s powers were clocking their peak. Japan lost world war-II. During that time, Toyoda Kiichiro, the president of Toyota Motor Company, said that "if we don't catch up with America in the next three years, our automobile industry in Japan will not survive." To accomplish that mission, they must learn the American ways.

The question here is, Does an American physically pull nine times more work than a Japanese? There is something that the average Japanese worker does that takes more time than an American. The Japanese are doing something that creates waste. If that waste gets eliminated, then the productivity can multiply by ten times.

So, Toyota Production Systems needed to eliminate unproductive workflows. Any human activity that absorbs or consumes resources but creates absolutely no value towards the end is called a "Waste." In Japan, they call it "Muda," and Muda means waste. To support the elimination of waste, they relied on two main pillars. 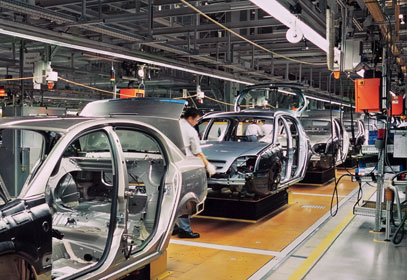 There will be an assembly line in the manufacturing process, where the components will be added in a sequence to an unfinished product as it moves from one station to another till it is complete. Just-in-time means that the correct parts needed in an assembly reach the assembly line when needed and only in the required amount in a flow process.

Just-in-time is an ideal state in manufacturing. However, like Toyota, the automobile industry, where thousands of parts are needed to make a car, is a complicated process. It is too challenging to apply just in time.

Small mistakes like defective parts, trouble with types of equipment, workers missing at the station, and countless other issues will result in an inferior or a defective product towards the end of the line. These will result in the stopping of the production line. If we do not keep the big picture in mind as the entire assembly line, it will reduce productivity and profitability. Conventional management methods will not help to produce using just-in-time. Autonomation should not be confused with straightforward automation. Autonomation is automation but with a human touch. In what we call simple automation, machines operate with a button switch and do what they are intended to do. Let us say that there is a slight abnormality in a device. It continues to do its job by giving erratic outputs. In manufacturing, it means a pile-up of defective products.

In autonomation, the machines autonomously prevent such problems or defects. To control defective products, Toyota equipped its machines with safety devices and other foolproof systems to prevent faulty products. The machines stop instantly when a fault occurs without allowing it to function continuously, giving a human touch to the machines.

A worker is needed when the machine is behaving normally. This allows the same worker to work on multiple machines, thus improving the efficiency of production. Everyone gets an awareness when an appliance stops giving room for problem understanding and further improvements.

Simply put, lean means eliminating waste which allows us to do more with less while delivering value to the customers.